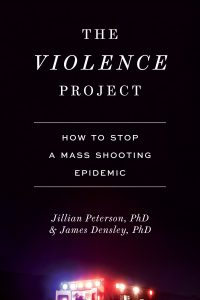 An examination of the phenomenon of mass shootings in America and an urgent call to implement evidence-based strategies to stop these tragedies.

Episode 123: Mass Shootings: An Interview with Criminologists Drs. Jillian Peterson and James Densley, the Argument for Data-Driven Nuance, and Steps for Prevention

Book review: What if mass shootings are the American way?

Goodreads Reviews – The Violence Project: How to Stop a Mass Shooting Epidemic

How to Prevent a Tragedy: PW Talks with Jillian Peterson and James Densley

Publishers Weekly Review – The Violence Project: How to Stop a Mass Shooting Epidemic

Using data from the writers’ groundbreaking research on mass shooters, including first-person accounts from the perpetrators themselves, The Violence Project charts new pathways to prevention and innovative ways to stop the social contagion of violence.

Frustrated by reactionary policy conversations that never seemed to convert into meaningful action, special investigator and psychologist Jill Peterson and sociologist James Densley built The Violence Project, the first comprehensive database of mass shooters. Their goal was to establish the root causes of mass shootings and figure out how to stop them by examining hundreds of data points in the life histories of more than 170 mass shooters—from their childhood and adolescence to their mental health and motives. They’ve also interviewed the living perpetrators of mass shootings and people who knew them, shooting survivors, victims’ families, first responders, and leading experts to gain a comprehensive firsthand understanding of the real stories behind them, rather than the sensationalized media narratives that too often prevail.

For the first time, instead of offering thoughts and prayers for the victims of these crimes, Peterson and Densley share their data-driven solutions for exactly what we must do, at the individual level, in our communities, and as a country, to put an end to these tragedies that have defined our modern era.

“Reading The Violence Project is like having the lights turned on in a dark stadium. Jillian Peterson and James Densley illuminate for us the darkest corners of our violent predilections. They’ve told us what to do; the rest is up to us. Groundbreaking!” -- Rachel Louise Snyder ― bestselling author of No Visible Bruises

“If you ever wondered how can we stop mass shootings, this is the book for you. By mixing compelling first-person interviews with mass shooters and significant data analysis, The Violence Project illustrates the tangible ways we can intervene and prevent a tragedy from occurring. No one is helpless—read this book and help stop violence before it starts.” -- Nicole Hockley ― co-founder and managing director, Sandy Hook Promise

“One of the most comprehensive studies of the subject”

“The largest study of mass shooters ever funded by the U.S. government reveals stunning information about perpetrators.”

“…the most comprehensive and detailed database of mass shooters to date”

“The Violence Project provides some insight into the history of mass shooting and what measures, if any, could affect them.”

“Jillian Peterson, Ph.D., and James Densley, Ph.D., built a new database of mass shooters that they hope will inform future research and policy decisions about how to effectively prevent and respond to mass shootings.”

“Jillian Peterson, Ph.D., and James Densley, Ph.D., built the groundbreaking database on mass shooters. … increasingly frustrated with television analyses in the aftermath of mass shootings that offered the simplified theory that the violence was caused either by guns or mental illness. The researchers advocated for more data-driven conversations about the phenomenon.”