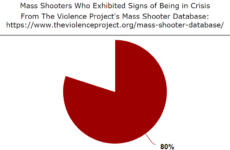 Did you know? 80% of mass shooters exhibited signs of being in crisis before they committed their offenses. Remember to prioritize mental health and check in on your friends and family! Data from: https://theviolenceproject.org/mass-shooter-database/ #mentalhealth #data #violenceprevention #SuicidePrevention Source: Twitter Return to all … END_OF_DOCUMENT_TOKEN_TO_BE_REPLACED

While mass shootings have occurred much less frequently this year, the number of other non-suicidal gun deaths is expected to be greater than last year. Increased stress, divisions over racial justice and policing, and political tensions are a few of the factors impacting the number of violent shootings. The Violence Project's James Densley told … END_OF_DOCUMENT_TOKEN_TO_BE_REPLACED 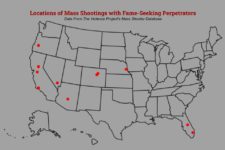 Did you know? Of the 171 mass shootings in the US between 1966-2019, only 11 perpetrators claimed they were seeking fame as a result of their actions. There are many different motivations behind mass shootings, check out our database to learn about others! https://theviolenceproject.org/mass-shooter-database Source: Twitter Return to all … END_OF_DOCUMENT_TOKEN_TO_BE_REPLACED