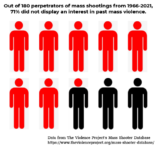 Out of 180 perpetrators of mass shootings from 1966-2021, 71% did not display an interest in past mass violence. #data #database #DidYouKnow #interest Source: Twitter Return to all data visualizations … END_OF_DOCUMENT_TOKEN_TO_BE_REPLACED

The Violence Project's co-founder James Densley spoke with Talib Visram from Fast Company about the contagion effect of mass shootings and mental health. “The reality is: We weren’t living our best selves before the pandemic. America was not a happy, fully functioning place where everybody felt included, and where everybody was thriving. Going … END_OF_DOCUMENT_TOKEN_TO_BE_REPLACED

This week, a shooting attack at a grocery store in Boulder, Colo., left 10 people dead. Just days earlier, eight people were fatally shot in a rampage targeting spas in the Atlanta area. As with almost every mass shooter in recorded U.S. history, both of the suspects in the recent attacks are men. A staggering 98% of these crimes have been … END_OF_DOCUMENT_TOKEN_TO_BE_REPLACED

Thursday, March 25, 2021: Our co-founders Jillian Peterson and James Densley spoke to Krishna Andavolu at Vice News about The Violence Project's research into mass shootings. Starting in the 1960s through the COVID-19 pandemic, they discussed risk factors and the common social script that lead to mass shootings. Watch the interview … END_OF_DOCUMENT_TOKEN_TO_BE_REPLACED